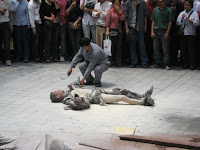 I came back to China and to my surprise I could NOT access my blog anymore. Goverment of China has decided is best to block few sites. I think they were afraid of a rise, since it was approaching the 20 years anniversary of Tienamen massacre. For few days they even blocked the hotmail too.
I took the picture bellow in Chongquing on 29/04/09 . It is a poor guy who set himself on fire because he didn't get the money the goverment owed him (according to the letters he left on the site). In this case, I do believe this is stupid and this doesn't neccessary needs to be seen on news (bloody car accidents with plenty of deads are more popular).
Bye the way, the guy wasn't dead...just burned to some degree. Police didn't arrest anybody.
Posted by cbalasa at 6/26/2009 01:17:00 PM