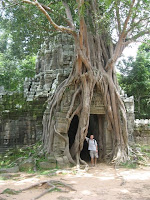 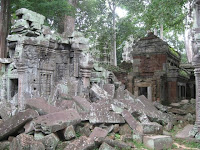 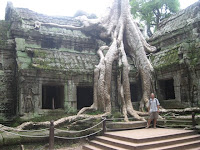 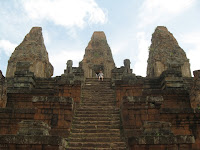 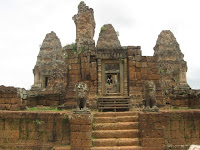 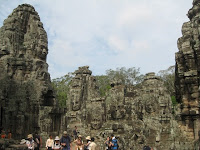 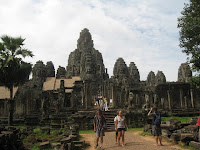 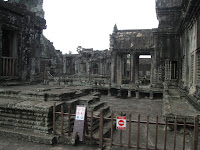 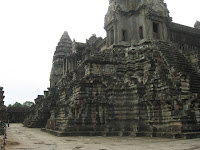 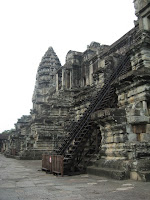 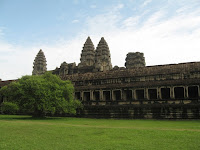 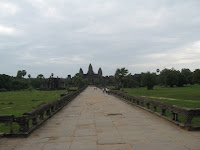 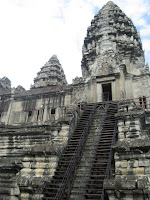 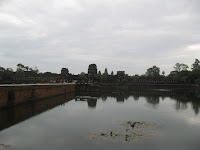 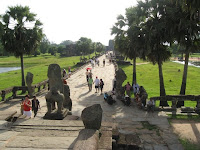 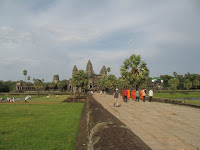 If there is one and ONLY ONE place you MUST SEE in the entire Asia, this is ANGKOR. I have never seen anything like this before. I did see it on TV and on the internet, but it was only when I saw the real thing I could realize how amazing it is.
There are over 100 temples spread over tens of kilometers. I have only seen 10 temples. The most famous is Angkor Wat. It does look good from far distance, but when you are really close to it you start asking yourself how the hell they built it. In the center is the tallest conical tower; around there is the first wall, with 4 tall conical towers at the corners; then there is the second wall, with 4 round towers at the corners; finally, there is the third wall.
The second temple I visited was Banyon, at the center of Angkor Thom city. It occupies a lot smaller surface, but it is tall and has a lot of towers; on each side of the each tower there is a face. I wasn't impressed with Preah Khan (although it streches on hundred of meters), Neak Pean of Ta Som. East Mebon is simple but interesting, Pre Rup is is a bit more complex and pretty tall; from the top I could see around for miles; far away (about 8km) I could see the top of the Angkor Wat. Ta Prohm seems to be magical, as it hasn't been restored and looks like it just have been discovered. The last temple I visited was Phnom Bakhen, at the top of the hill, from where I could have a view to the Angkor Wat.
It is so unbelievable that a great empire that build the greatest temples in Asia hundreds of years ago is now a poor and undeveloped country.
Posted by cbalasa at 8/06/2009 05:15:00 AM