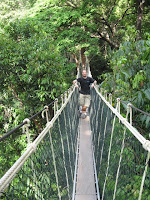 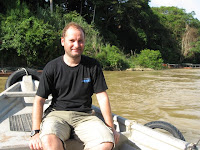 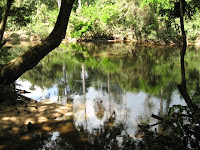 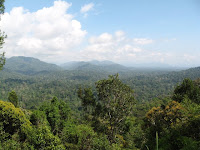 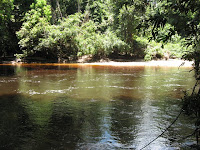 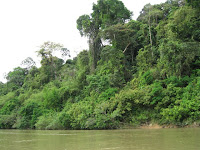 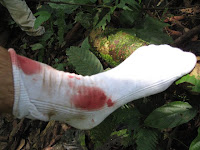 The day before yesterday I took the Jungle Railway train. It is a mail train that leaves 6 AM from train station (10 km off Kota Bahru) and goes valleys, jungles, and rural areas. It was an interesting ride, I could see brown rivers running for kilometers through jungle. After 11 hours I arrived at Jerantut and I made it just in time for the bus to Kuala Tahan (a village just across the river from park). The accommodations were expensive so I settled for a dorm bed. Yesterday I cross the river around 8:30 and entered the park. This is an 150 million years old rainforest. First I went for the canopy walkway. This is a swaying bridge made of ladders and bound by ropes set at 40 meters above ground. It is the longest in the world. It was a nice experience, although I couldn't see any bird or animal there. Then I went to a 340m hill where I could have a good view. After that, I went for Lata Berkoh. It was nothing spectacular, and I walked more than 8 km for that. There I thought I could take a boat back, but I wasn't so lucky, so I had to return by foot, another 8 km. The trekking through jungle was interesting. The jungle was hot and humid, but I was well protected from the sun. The vegetation outside the path was thick, I couldn't see too far. A couple a times when I've lost the trail I barely made it around, without a machete it will be very hard outside of the beaten path. At some point I've notice a little blood on my sock, I thought I probably cut myself in some tree, but when the stain became larger I stopped to have a look and I found leeches having a feast. An experience that I would prefer not to have it. On the other hand, I heard that they might actually do some good, sucking the bad blood. This morning I took the boat downriver to the Kuala Tembling. It was a pleasant 2 hours ride. From there I took a minibus to Jerantut and later the bus for KL.

berk...how did they go into your socks?
audrey