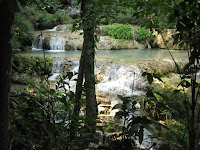 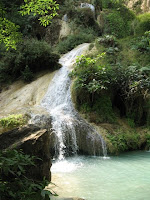 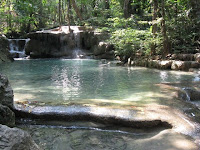 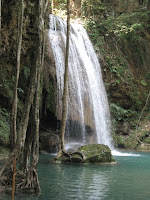 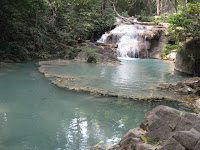 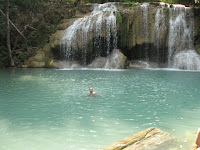 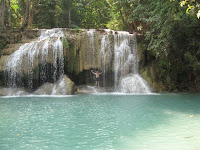 I woke up in the morning after 5 hours of sleep, and to my surprise I wasn't that tired. It must have been the clean air by the river. The bungalow didn't have a window glass, just a mosquito net. I had only one thing on my agenda: going to the Erawan falls. This was supposed to be best waterfall in the region, or maybe even in Thailand. I had the breakfast from the street vendors, just like locals (some sort of a soup with rice, chicken, and other things), and caught the bus. I arrived the Erawan National Park just before 10, and I have found so many people. Along with some french people I met on the pass we started going up the trail. This is about 2 km easy trail. The waterfall has 7 tiers ( in other words, seven smaller waterfalls downstream). The fist tier was nice, but the second one left me speechless. The waterfall pictures I saw weren't even close to the real thing. Sometimes is like this, unless you are there, you have no idea how heavenly can be. There were quite a few people swimming there. The third and fourth tiers were nice, the fifth one very nice. Somewhere between the sixth and seventh tier I decided to get in the water and swim a little bit. It was a little bit difficult to change, I had to watch my things very careful so the monkey wouldn't take them. I waited until a couple come and the I got in the water, little bit cold at beginning, but after only two minutes was fine. I climbed to the seventh tier ( the top one) and of course took some more pictures. The trip up the trail took about one and half hour, but the way down to the second tier only 45 minutes. By this time, there weren't that many people so I got in the water and enjoyed my sweet time. Now, I have traveled a bit, here and there, seen many waterfalls, but I have to say that this place is absolutely the most beautiful waterfall I even been to.
I was supposed to take the bus back to Kanchanaburi, and from there another bus to Bangkok, that would leave me somewhere at the south bus terminal. In the parking lot I saw a big nice bus and asked the driver if it goes to Bangkok. He said yes, and yada-yada-yada I hoped in for free (well, I did tipped the driver and the guide). 3 hours later, the bus dropped me very close to Khao San Road.
Bangkok has over 9 million people and is very big. I realized that the real beauty (nature beauty) is outside of the cities, so I made a bold decision: I will leave Bangkok tomorrow evening, with the an overnight bus. I found a better room and look for the tickets for Ko Tao. Turns out that everybody is going there, and looks like the main reason is the Fool Moon Party that it's going to be held in few day, on another (but close) Island. I made another bold decision and bought the tickets for another island, on the other coast.
I had for diner some noodles with sea food, cheap and very tasty, followed by, of course, mango shake. What an awesome day!

When I'll have more time I'll have full info on prices. Sometimes soon.