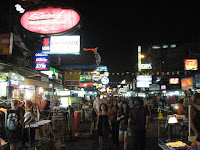 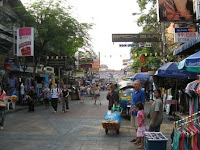 The plane landed in Bangkok around 7 am. It was a little bit of fog outside and not hot at all. I got visa exemption but for some reason is only for 29 days. It was supposed to be for 30 days, Maybe they count the days differently than me. I took an express bus from airport. The first thing I noticed it was that they drive on the wrong side of the road. They have the steering wheel on the right side. The second was the crazy traffic. It took almost 2 hours to get to the Khao San Road. I gotta admit I wasn't expecting much of Bangkok, being a capital of a third world country. The city is really big and a good part is well developed. I should have thought of that, judging by the size of the airport. It was only the beginning of a day full of mistakes. I have found quite quickly a cheap room, with shared bathroom and fan. Happily, I had a shower and I went exploring. I tried to go to the Great Palace, but about 3 different people told me that it's closed until 1pm. I have read about this trick and I still fell for it (I will find out that in few days). Anyway, some dude talked me to into taking a tuk-tuk (3 wheel vehicle) really cheap and instead visit some other attractions. Half an hour later I found out why it was so cheap: the drivers gets gas coupons for dropping me in those places. I didn't stay much in the first place (standing Budha), the second place was actually a clothing store - I got out in a minute, and the third one I didn't feel like visiting. Two minutes later, when I got out the driver and his vehicle were gone. It's true I didn't pay him but I wasted time. I took another tuk-tuk to the Pantip Plaza and costed me 3 times more than I was quoted the first time, and this was after slashing in half his price. I could barely breath in the traffic, that bad was polutions. I bought a minilaptop and few other items. The laptop came with linux, but for a couple of bucks I had it changed to Windows. I ate something in the mall during this time, I couldn't really tell what it was - except for the rice- but it was tasty. After shopping took a taxi back to Khao San. I insisted to use the meter and it costed me just a little bit more than the tuk-tuk. Lesson learned, from now on no more tuk-tuks. By the time I got back was hot outside so I spoiled myself with a mango shake. I missed them so much. When I got back to the room, I was surprised how hot it was inside. I started the fan and in the first few moments I was afraid it might break loose and fall into my head. It's a piece a crap very noisy. I don't know how I am going to sleep at night.
Without fan, it's too hot, with the fan is too noisy. Second lesson learned: no more rooms with the fan, if I can afford AC. Same goes for shared bathrooms. I do hope I will afford this, although today I realized that a lot of prices are higher than the ones I found in the travel guides. Even the food is more expensinve, for example the thai pad (some sort of noodles) was 3 times more than I read about it. That didn't stop me to buy it. I had an hour of thai massage. It was very relaxing, I almost fell asllep. I said almost, because to the end the strong fat lady started walking on my legs and on my back. Overall, a good experience, but next time I think I will try something else. I have spend the rest of the evening walking the streets around, There are full of tourists on vacation and you can tell they are enjoying it. I looked for a tour outside of the city but I couldn't
find one the way I want it, so I decided to buy just the bus ticket and go on my own. Honestly, I don't think it will go too well, but maybe this will help me to develop some travel skills. I need to do better than this. Right now, I am looking forward for a good night sleep and catch up with this new timezone.