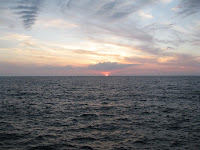 I woke up very early, because of the noise around. I couldn't sleep anymore, so at 5am I went for a hike. The road from west coast to east coast goes through the forrest. i haev about half on hour when there was no light whatsoever on my path, I just used the flashlight. Although I knew there are no big animals in the forrest, I realized that maybe it wasn't such a good idea (to go into a forrest at night). Anyway, I kept going and about an hour and half later I was at Tanote bay. 10 minutes later I caught the sunrise. It was nice (but no magical, or spectacular). I haven't seen one in many many years. I went for another viewpoint and then returned to the bungalow, about 4 hours since I left. I was tired but satisfied.In the afternoon I went snorkeling. Some folks I met on the diving trips told me about a nice and close spot. They were right, I saw a lot of fish, even some I haven't seen before. I spent about 3 hours in the water. If I knew it would be that good, I would have stayed one more day.
Expenses
room 300
milk 50
ham 50
bread 28
boat ticket Ko Samui 300
snorkel rental 80
water 10
water 20
beer 35
tuna 40
bread 20
Posted by cbalasa at 2/21/2009 04:20:00 AM

Beach; beach and beach...how lucky you are...here in Paris, i'm dreaming of this type of travel and if i wasn't pregnant i could tell you "i'm coming with next plane..."