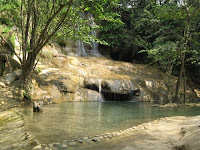 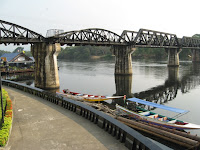 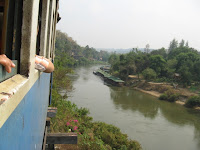 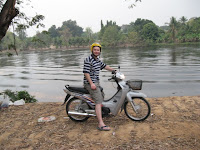 In the end, I choose to turn off the fan (noise does bother me) and deal with the heat. I woke up a little bit tired, but not so bad. I decided to split the load and put valuables and few things for 2 days in a small backpack, and left the big one at the hotel. I had omelet with rice for breakfast and then I took the minibus for a 2 hour ride to Kanchanaburi. On the road I noticed that there are very good roads in Thailand, and traffic is not bad at all outside off the Bangkok. The second thing I noticed was that most (almost over 95%) of the signs are written using the Thais characters, not the roman ones, so there was no way to tell what the stores were selling or sometimes even the directions. I arrived at Kanchanaburi around 11:30 and tried to book a tour but was nothing available because all the tours were starting in the morning. I asked for a train ticked to Nam ToK but I was told I wouldn't have time to come back. I bumped into a 7-11 store and bought water, ice cream and mosquito repellent. I decided to go there by bus and take the train back, and I was lucky to catch one pretty quick. I dropped me to Sai Yok Noi waterfall. This is a very nice but very small waterfall, and I was a bit disappointed. I took a taxi to Nam Tok train station, and arrived just in time to catch what I thought the last train on the Death Railway. It turns out that was actually the second to last train, being late for about 1 hour. The Death Railway is named like that because the large number of people (POWs and asians) who died in the second world war while building it. It was supposed to be a scenic ride, I found it so and so. I got off just before Kachanaburi, at the bridge over the Rive Kwai. I have to say that the bridge was a lot more spectacular in the movie (with the same name). I had fried noodles with chicken for late lunch (looks like I can handle food a little bit spiced). I have found out a decent and cheap room with private bathroom in a bungalow by the river. Then I rented a scooter and rode it for about three hours, all over the places. I got used very quick to drive on the left side. That was so much fun. Back at the guesthouse, I had the dinner and relax on the river waterfront. I am getting in the vacation mood!

To provide an equal opportunity for non-romanian speakers to be happy for me or just hate me.

Absolutely eerie... someone named Carmen left the message above. Thanks for blogging in English! And yes, this is Carmen.

It's not so bad in english...i can understand and it's funny to have to explain to your brother...!Audrey