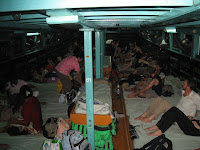 After a day of relaxation at the beach, it was the time to go somewhere else: from the west coast, where is Andaman sea, to east coast, in the gulf of Thailand. I took a log-tail boat to Ao Nang (10 minutes), then a minibus to Krabi (40 minutes) and then a bus to Surat Thani 4 hours). I arrived around 2 pm. The night ferry was leaving at 11 pm, so I had about 9 hours to wait. By pure chance I found a computer service shop and got my laptop fixed. Turns out it wasn't a virus but a problem with conflicting ports in Windows. One thing I did in the past when I had a lot of time to spend in a city and too much weight to carry it around was going to the movies. I think one time I saw 3 movies one after another. So I found out there is a movie theatre in the town, took a minibus and got there. It was in a big mall, so I had something to eat too (KFC, for a change). I saw a movie called "Underworld" and the was enough. The movie was dubbed in Thai so I could not understand a single world. I have spent some time afterwards wandering in the mall. If until now everywhere I went I saw more tourist than locals, this time was different, I was the only tourist in the entire mall. I sort of liked it.I returned close to the pier, walked around for a while, got some food from a night market. I haven't seen in other countries this, I do not know the reason they set up markets at night (actually, more like evening). Maybe it's because of the heat during the day, maybe it' just a lifestyle. Finally, the time to get on the boat. I knew the night ferry wasn't a luxury cruiser, however I was expecting a little bit more. The boat is a freighter, and on the main floor they set up tiny mattresses on both sides. This was like a dorm for 60 people and it was almost full. The mattress was about 1.80 by 0.5 meters, so barely enough. I guess in times like this I would prefer being stuck between 2 young beautiful women, unfortunately I wasn't that lucky . The good part was the mattress on my right was free, so I slept comfortably for almost the entire 8 hours trip. When I woke up the boat was almost at the pier.
Expenses (bath)
boat Ao Nang 80
minibus Krabi 60
bus Surat Thani 140
breakfast omlete 60 orange juice 20
water 20
boat Ko Tao 55
0minibus 2x30=60
lunch KFC 120
movie 90
dinner hot dog on stick 2x10=20
watermelon slice 25
Posted by cbalasa at 2/19/2009 05:10:00 AM