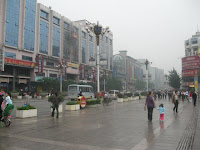 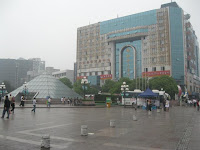 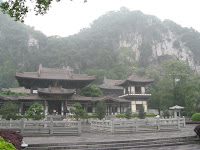 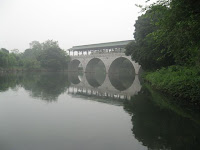 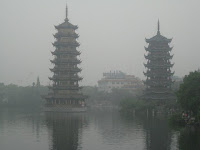 From Hong Kong I took the subway all the way to the border with China. I crossed into Shenzen and from there I took a high-speed train to Guangzhou (1 hr). I was impressed with the train (155km/hr, very smooth), high-rise buildings and wide roads. On my way I found out that this week is a very big trade fair, and all the rooms are double to four times more expensive, so I decided to pass this city. The first challenge was when I had to find the long distance bus station in Guangzhou, as very few people speak english and all signs are in chinese. I took the night bus to Guilin - 9hrs., and while the bus had all the confort, I didn't sleep very well in the reclining seat. I arrived just before 6am in the city, it felt strange at beginning but I found my way and got a room in the hostel I was looking for. I slept a couple of hours and then went exploring the city. Unfortunately, it was foggy and sometimes was even light rain. I lked fow few good hours on the streets and in the Qixing Gongyuan (Seven Star park). I was just amazed - the city is small by chinese standards (just 1.3 million people), but is very animated. The park was very nice, and there were peaks (small mountains), a river, a zoo (I did see a panda but it wasn't that cute - it was big and was sleeping worry free), some hot springs, and in some places the tree were smelling so nice. I managed to get a haircut, do some shopping and eat. It wasn't that cheap I was expecting, and prices are so relative.
My first impression on China is so positive. I will predict I will like it a lot.