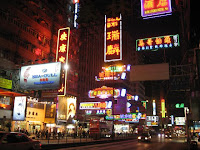 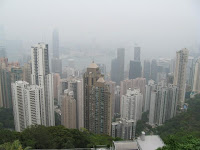 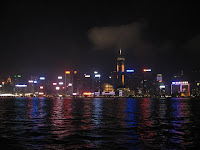 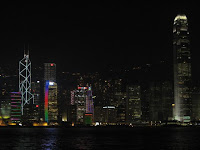 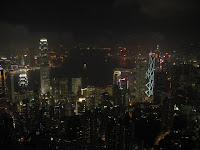 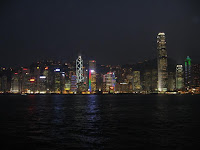 I arrived in Hong Kong at the beginning of the Easter holiday. On Friday and Monday offices were closed, so I had to spend a week to get China visa. Peninsula Malaysia is more expensive than Thailand; Borneo Malaysia is more expensive than peninsula Malaysia; Macau is more expensive than Borneo Malaysia; Hong Kong is more expensive than Macau.
If Macau is considered by some people as a big casino, Hong Kong can be also considered as a huge shopping mall. The city is dominated by sky-scrapers (mostly along the shore line) and high-rise apartment buildings. It is sort of New York of the Asia. It is very crowded and very busy. A mixed of asians, european tourists or expats, african and indian immigrants.
I stayed at the famous (among budget travellers) Chungking Mansions. This is a big building, not very pretty but well located on the Nathan road (a large shopping street). It is not on the Hong Kong island, but on the Kowloon peninsula. There are a couple of guesthouses on each floor. A guesthouse was originally a big apartment (something like 10 by 10 meters) that has been subdivided in very small rooms (the smallest I've been was about 1.4 by 3 meters - definitely not for claustrophobic).
From there there is subway to the island but I always preferred the ferry. It is cheaper and scenic, and runs every 6 minutes.
I went twice the the no. 1 attraction of the city, the Victoria Peak. This is a hill from where the bay area can been seen. The view is awesome and at night is even better. Unfortunately, I haven't had a single clear day, it was cloudy and sometimes rainy. There is also an awesome view (and in my opinion even better) of the bay and the city skyline from the Avenue of the Stars (this is a street along the waterfront on the Kowloon, sort of the Hollywod Blvd., having the stars of the famous chinese actors). Every night at 8 there is a show called the Symphony of Lights, when a lot of buildings projects lights and are themselves lighten in different colours and patterns, according to a music that can be listened along the Avenue of the stars and also on radio. It is the biggest permanent light show. It is just stunning! Also at the category biggest in the world there are mid-levels escalators, a long series of escalators that go about 800 meters. It wasn't that much of an experience. on Wednesday most of the museums have free admission, so I went and visited Museum of Space, Museum of Art, Museum of Science and Museum of History. Another attraction as Temple street night market, but I was more impressed with few other streets that are so animated at night, particularly the one that sell electronics goods. On the main street in Kowloon (Nathan Road) there are touts that are trying to get you to a tailor shop, or sell copy (fake) watches (Rolex and others), massages and other things. Everything is expensive here, so I had every day junk food which is the cheapest (McDonald, Burger King, KFC). A nice budget food chain is Yoshinova, which serves asian dishes.
Although at beginning I wasn't happy at all I have to spend so much time here, in the end I am glad - Hong Kong is a unique and must-see city. At some point I was thinking it wouldn't be bad to look for a job here :)). Did I mention how beautiful are asian women here ?

P.S. I would like to thank to my all steady readers and if is there any other info they might want to see in my blog, just let me know.