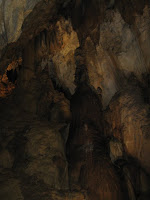 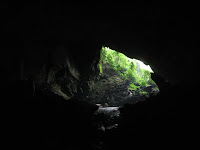 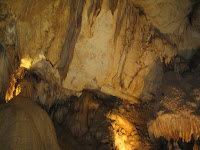 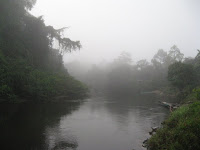 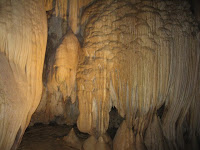 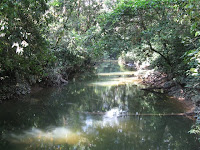 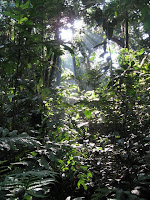 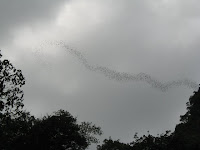 Yesterday seemed to be a bad day for me. I missed the airport bus by one minute, so I had to wait for the next one...one hour 40 minutes. At airport although there were still 20 minutes till the morning flight would take off, they didn't let me board the plane, so I had to take the afternoon plane, which was...6 hours later. The flight was only 20 minutes and I found it expensive.
I found accommodation in a homestay, and we were invited to a funeral party. Well, it wasn't exactly funeral (was a week after) and also not a party (they did sing a bit and had some speeches), but a meal with 80 people.We had time to go to one cave and see bats coming out of a cave (tens of thousands).
Today I went trekking to 4 caves: 2 in one direction, in the morning - Wind Cave and Clearwater cave. They were interesting. On the way there we came accross a snake, sitting exactly in our path, and no plans to move anytime soon. Outside the Clearwater cave I had a nice bath; the water was, of course, clear and cold, but the current was strong, it was very hard to swim against it. In the afternoon we went to Langs cave and Deer cave, which was the biggest cave in the terms of volume. I would say they were pretty impressive caves. Unfortunatelly, I have to give up my plans to climb to see the Pinnacles, because of the cost and duration (what could be a one day trip has to be done in 3 days, with the guide).